For this website's inaugural post I thought I'd detail how it was built.

It starts, I suppose, with an HTML templating package I wrote. For various things I'd needed to host static HTML pages in the Wolfram Cloud. My basic process there was to write some block like:

And I'd fill it in with various parameters using TemplateApply .

Over time this just got too clunky, though, and I wanted a better system, so I sunk a day's work into building a system to display that HTML right in the notebook as a listing of cells and export it to a .html file, exporting all the CSS and image necessary to get things working.

And, you know, it worked pretty well. But on the other hand it meant I was writing the raw HTML. Even speeding things up using templates and nicer stylesheets could only got me so far. That prompted me to think "hmm... do I know do this for markdown and write a converter?" which I really didn't like the thought of. So instead I decided to look at a website I had a guess was built programmatically. Which eventually got me to pelican .

Looking through the docs got me convinced that this was, in fact, the way I wanted to render a site. It was simple, supported Markdown syntax, was extensible. And even better it was written in python so if I had to extend things or figure out what was going on I'd be able to do it in a langue I was fluent in.

So as with most python projects, the step-1 is to build a virtual environment and install via pip. The whole flow looks like this:

I thought, though, that it might make sense to build this into Mathematica. After all there're a lot of quality python packages out there and the easier it is to use them in my primary development environment the better.

So I built a quick ProcessObject wrapper for a virtual environment, which I use via the PyVenvRun function

The core of the function is that there is a ProcessObject which has been initialized with the appropriate virtual environment. If one hasn't been started, PyVenvRun starts it and kills after the run is over. In the run itself it generates start/end-of-process flags via CreateUUID , passes the start flag to be echoed, passes the appropriately escaped command, then the end flag to be echoed command and reads until it times out or finds the end of process flag.

It has a timeout, of course, for when things go wrong, which defaults to one second:

You can see that it just timed out there, generating no output. But we can get the output back by increasing the timeout:

In any case that's not terribly exciting. We'll use it, though, with a virtualenv set up with pelican and Markdown, to build our site.

To actually build the site we need to set up the core content and setting files and provide a theme, the latter of which being of course the bigger time-sink. With that we can test locally using another python command-line tool.

The actual function for building the site is just going to be a very simple wrapper to PyVenvRun , but before that the site needs actual content.

For that we'll take a look at the standard pelicanconf.py file that the pelican-quickstart command in the CLI will produce, then replace the fields with templates:

We'll set that up with a function that will also build out the editing layout.

Generally, one is expected to provide a custom theme for one's pelican website. There are lots of different pelican themes out there, many are quite attractive. I chose a very simple (but nice) one to build off of called alchemy .

For convenience when testing out themes, though, I wrote a quick little theme lister / installer function PelicanThemes .

There's a lot of info out there on editing pelican themes, but basically it's just setting up some HTML templates and CSS to make the site look how you want it. Easy enough, very convenient, etc.

I made my own site theme, building off of elements I saw in a number of the themes available.

Obviously one needs content before the site can be built-out, but that's rather more complex than a simple test is, so I'll start with the latter.

The build process is really just all pelican doing it's thing. The build function itself is just a basic PyVenvRun call, with the site directory passed (defaulting to the current notebook directory). We need to set the timeout rather higher, but not much as pelican is quite fast (on small sites).

Then we'll want a way to test the site. For that we'll use python's SimpleHTTPServer, but, again with a Mathematica layer. The simple server setup is almost exactly the same as the PyVenv setup, with a ProcessObject and a root directory, etc. But here we need to choose a port and stuff. I chose 7001 because HTTPHandling`StartWebServer uses 7000 by default.

So once we've built out the site, we just start the PySimpleServer on the output directory of the build and we're good to go. So the process looks like 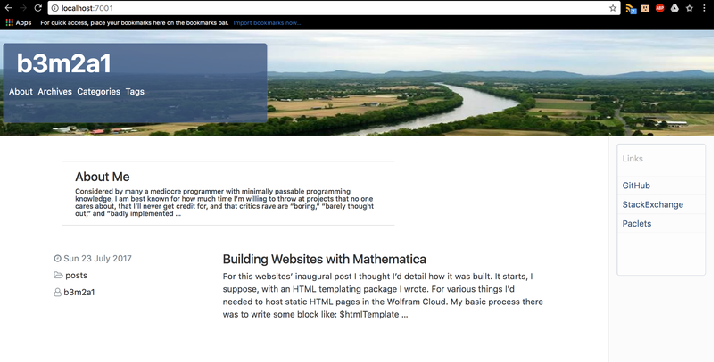 Obviously the most important part of a website is its content and the way pelican sets that up is to have you write in either markdown or reStructuredText. In both cases you provide the text and the metadata and this gets processed and fed into the system where it can be consumed by the templates.

Since I use Mathematica for so much already, it was worth it (to me) to make a system to create my content in notebooks.

Metadata for pelican can be pretty much whatever, but there's a standard subset of fields

Since I was using Mathematica to write my content, I realized there was no reason I couldn't simplify these fields.

For the Date and Modified fields it made sense to just use DateString and DateObject to format everything correctly. And this way the Modified could always be Now while the Date would be the original creation date.

And then I can just put these in a special Metadata cell in InputForm as an Association . And of course any other fields can be added to that association (the Category field can be important, too).

I'm used to markdown from working with Stack Exchange, so I opted to use markdown as my blog posting format. So, since I also wanted to be able to write my blog pages in notebooks, I needed a notebook-to-markdown converter. I decided to just knock one up rather than try to adapt the best existing one to my purposes, because I really didn't need to do much fancy stuff.

The basic idea is as follows:

Then just set it up so that when the notebook is saved, it also exports to markdown, using this mechanism. I stuck that all into a function called PelicanNotebookSave and added the following to my stylesheet:

With the content built we now have to publish our site. For that we'll go to a quick export function for a directory to the cloud, which I called PelicanDeploy which is built on top of a function WebSiteDeploy that takes files from a directory and exports them to the cloud, with some selectivity for file names and modification dates.

The core of the function is using CopyFile on a CloudObject to move the files up to the cloud, making sure to set the CloudObject permissions to public. Essentially it looks like:

Note that one needs to actually be connected to the cloud, which I tend to do via KeyChainConnect

There's one last complication though: the cloud doesn't seem to display index.html files. A work around is to pass it to some URL like path/to/home/main.html. It make sense, however, to deploy both (just for security). So our deployment ends up looking like this:

With that in place we're good to go. I wrote that into the function PelicanDeploy so just run:

And your site is built ( Note: when exporting lots of files I've sometimes hit a timeout. Take a break and come back and it should work. )